It has been a busy week when we’ve been at Microsoft Ignite conference 2016 which took place in Atlanta from 26th to 30th September. This was Microsoft’s second Ignite conference (the first one happened in Chicago in May 2015, see here) with more than 20.000 people attending and more than 1.000 sessions. For us, it was our first time in the US South (in Georgia) and we enjoyed it very much.

Welcome to Atlanta and in GCC

Atlanta did welcome us with warm and sunny weather (about 85°F then, after a thunderstorm on Tuesday, it was cooler). For me the event started with a pre-event day about PowerApps on Sunday which was great to meet the members of the PowerApps & Flow product team. On Monday morning, Ignite started in Georgia Conference Center (GCC) which was just 20min away from our hotel and was a nice walk each day. To make it short: the walking distances were…. far. It took at least 10 minutes to walk from building A to building C where the lunch was prepared in sandwich boxes for take away. It was a clever idea to avoid the needle wholes and walk outside, along the buildings. My highlight was the park at building C with sun and live music.

Feeling the masses was not as bad as in Chicago last year. except for the keynote, some sessions and the connecting corridors, well and the Expo Hall at some times. The lunch boxes were ok, we sat outside in the sun and ate there.

Well, in my opinion there was not a large number of technical news, but very interesting ones. My personal highlights have been OneDrive (the new NGSC client, see here), the new SharePoint, PowerApps and Flow and, of course, Office and Office365, the Microsoft Graph, Delve is now named MyAnalytics, Azure services as Cognitive Services, GA of Windows Server 2016 and SCCM 2016 and sure, there was more. Microsoft shared the vision how they see the IT future from a strategic standpoint with connected services and the integration of services into everyday business and consumer life. See some of the topics here:

I need to remind myself that in future, I will avoid attending the keynote session at such large conferences. It’s hard to get a good seat, it’s tight and inconvenient and the Wifi hardly works (see the following left picture). The only reason for attending is to experience the vibe. At this Ignite, for me, there was no vibe (in opposite to the Microsoft Build conferences). So better to watch it online or in an overflow room (which was a hall with much comfort in the Georgia Conference Center, see the picture on the right) where there’s space, power and working Wifi.

Actually I remember, I was waiting for news for the first 45 minutes. This was more a redelivery that… Microsoft cloud is important (just to ensure, we’re all on the same path…). It started with announcements after that…

Funny enough, my notebook decided to update to the latest Windows version during the keynote.

The Twitter hashtag was #MSIgnite. We, @magrom and @atwork have been active in Social media as well. Have a look what happened in Social Media at https://bit.ly/IgniteTweets made by our MVP buddy John White. 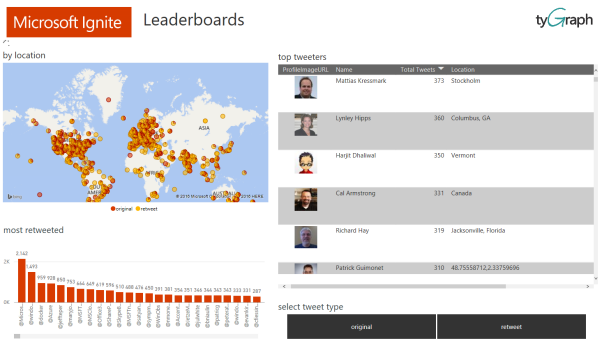 In total, there have been more than 1.000 session. Happily, most of them they were recorded and are available online and for download at ignite.microsoft.com.

Ignite delivered sessions in all flavors and from packed (with overflow rooms) to relatively emtpy. Not all sessions which were full had an overflow room, but attendees could watch streaming sessions with their own device. See some snapshots here.

I could’nt resist to take some selfies in some sessions… (with Darrell and Martina).

If you wish to download the session videos, you can use this PowerShell script made by our MVP colleague Michel de Rooij here: Ignite 2016 Slidedeck and Video downloader.

Martina Grom took part in the Ask us anything about Microsoft Office 365 Groups interactive session on Friday, together with Darrell Webster, Eric Zenz and Christophe Fiessinger. Here’s some snapshots from that session. 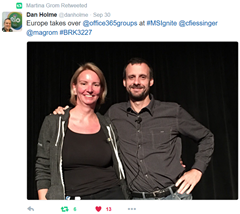 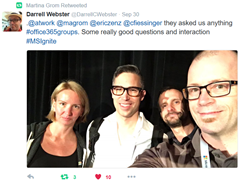 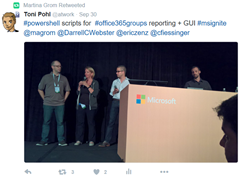 Mostly, a lot of side events come along with such a large conference. We enjoyed it very much attending a couple of parties as SharePoint Community Social (AKA SharePint), the AvePoint Red Party, the Exchange 20th Anniversary event, the MVP Breakfast and more in cool locations! 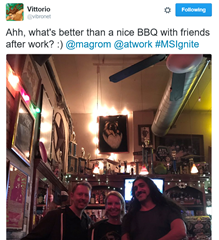 Uber helped a lot to get to various locations and restaurants around the conference.

From a networking perspective, the conference was great. Besides of attending sessions, the Expo Hall provided a great way to meet with members of the Microsoft Product Groups (PG’s) and to ask the experts directly. There have been Theater sessions in the Expo hall as well, some of them had a huge number of attendees, others were relatively empty.

We met friends and MVP colleagues from all over the world there. This was awesome.

Hope these impressions express that we had a lot of fun and enjoyed the conference very much.